Czech children under age 13 who use Facebook or Instagram are less than four months away from becoming lawbreakers. What makes the situation even worse is the fact that unless a law is passed by this May that would set the threshold for the use of social networking services to 13 years, from that point their use, along with other services, will become illegal for every person aged from 13 to 16 who does not obtain consent of their parents. This issue has already been addressed in our blog by our colleague Jiří Průša. But let’s go deeper.

Part of the professional community, sometimes the children themselves, approves this limitation: “Children deserve special protection because they are less aware of the risks and consequences of processing personal data.” However, for me, this argumentation rather means: “We don’t know how to teach our children to use the Internet safely by using critical thinking, which makes them easy to manipulate, so it’s better to ban them entirely from using some of the services.” Instead of teaching our children to act with deliberation from early age, we teach them that whenever they are about to face some problems, it is better to keep out. This is, in my view, a very simplified solution that, in addition, will put decent children who normally honor and respect the rules into a situation where they might start thinking of a way to break the law just to keep their favorite several-year-old social network accountAs part of Safer Internet Day, in the European House there has been a debate on this subject among experts and also children from the Czech Republic, the Netherlands, Croatia, Cyprus and Slovakia. Children who use social networks to facilitate communication, education and for well-advised self-representation think that the age of 13 is absolutely sufficient. Increased levels of parental bans are perceived as frustrating for some children, who feel that they are losing their own space where they can develop and self-realize independently. This feeling may hinder some children in their desire to stand on their own two feet and find their own path in life. On the basis of the discussions with children, the Safer Internet project representatives are urging the government to speed up the adoption of the law that would set the age limit to 13, and prevent the contradictory situation where from May children who don’t need their parents’ consent in order to have sex will have to plead for a Facebook account. 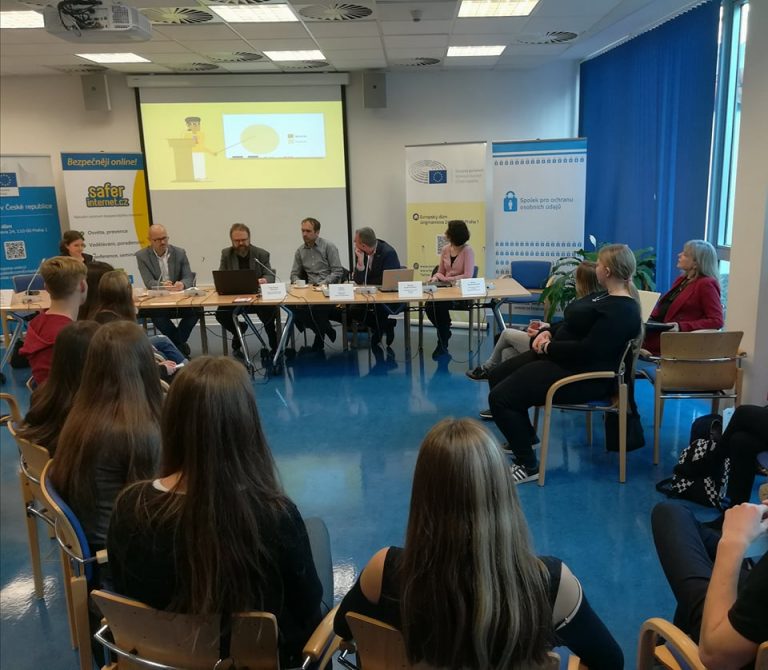 Regarding the reasoning that mentions the mental, moral and emotional maturity of thirteen-year-olds, in my view, the solution here should be awareness raising and education instead of restrictions and prohibitions.

Unfortunately, it is true that our education should hurry with the introduction of new content for teaching computer science and information thinking in primary and secondary schools, but above all, it should make radical changes to the training of teachers so that social networks stop displaying gems like this:

We are having an inspection at our school next week, so my sweet ninth graders told me today: “Ms. teacher, what are you gonna do if they come to the computer science lesson? You cannot even turn on the overhead projector.” 😀 Alas it’s true…

I’m having the same problem, but I always tell them that it’s not my job to show them everything and if they don’t know something, they’re old enough to look it up themselves, that’s the best way they would learn… 😀 Then I look over their shoulder to see how it’s actually done 😀 😀

In addition to the discussion in the European House, on the same day there was also a Regions for Safer Internet conference, where Michaela Štáfková from the addictology center had a very profound speech called Children in Cyberspace. In the speech that focused on practical experience with clients dependent on some Internet-related services, she mentioned several times that the problem is not the technology itself, but the inability of adults to talk to children about this completely new lifestyle that none of us experienced during our childhood.

During the meeting the issue of children viewing pornography was also opened. Despite the fact that making pornography available to children is a criminal offense, there are several clients at the adolescent outpatient clinic in Zlín who are demonstrably addicted to pornography. These clients are aged 11 to 16. In her speech, the head of the adolescent outpatient clinic asked adults to be brave and to not be afraid of talking to children about pornography. On behalf of the Safer Internet project, we are joining this message and asking parents and adults to prohibit less and devote more energy to awareness raising and education in this area. Because the ban may be the biggest risk, as one can learn from the story of the founder of The Breck Foundation Lorin LaFave, who lost her son also because of the strict prohibition and unwillingness of teaching staff to deal with suspicious behavior on the Internet. Lorin, according to her words, would never repeat such a ban. If parents learn about some dangerous activities on the Internet thanks to their children, they can also use our STOPonline.cz line.

To end the article on a high note, I attach a photo from the prize-giving event of the nationwide Quiz Plus contest, in which some children have demonstrated a wonderful understanding of the issues of the Internet of Things and their own endeavor and motivation to learn and improve in the field of information technology. 31,000 children from all over the Czech Republic participated in the competition and the most successful of them were awarded on the occasion of Safer Internet Day right in the premises of the Regional Authority of the Central Bohemian Region.