BIRD is a fast, robust and memory-efficient routing daemon designed and implemented at the end of 20th century. Its concept of multiple routing tables with pipes between them, as well as a procedural filtering language, has been unique for a long time and is still one of main reasons why people use BIRD for big loads of routing data.

The original design of BIRD has also some drawbacks. One of these was an idea of two separate daemons – one BIRD for IPv4 and another BIRD for IPv6, built from the same codebase, cleverly using #ifdef IPV6 constructions to implement the common parts of BIRD algorithms and data structures only once. If IPv6 adoption went forward as people thought in that time, it would work; after finishing the worldwide transition to IPv6, people could just stop building BIRD for IPv4 and drop the #ifdef-ed code.

The history went other way, however. BIRD developers therefore decided to integrate these two versions into one daemon capable of any address family, allowing for not only IPv6 but for virtually anything. This rework brought quite a lot of backward-incompatible changes, therefore we decided to release it as a version 2.0. This work was mostly finished in 2018 and as for March 2021, we have already switched the 1.6.x branch to a bugfix-only mode.

The second drawback is a single-threaded design. Looking back to 1998, this was a good idea. A common PC had one single core and BIRD was targeting exactly this segment. As the years went by, the manufacturers launched multicore x86 chips (AMD Opteron in 2004, Intel Pentium D in 2005). This ultimately led to a world where as of March 2021, there is virtually no new PC sold with a single-core CPU.

Together with these changes, the speed of one single core has not been growing as fast as the Internet is growing. BIRD is still capable to handle the full BGP table (868k IPv4 routes in March 2021) with one core, anyway when BIRD starts, it may take long minutes to converge.

In 2018, we took some data we had from large internet exchanges and simulated a cold start of BIRD as a route server. We used linux-perf to find most time-critical parts of BIRD and it pointed very clearly to the filtering code. It also showed that the IPv4 version of BIRD v1.6.x is substantially faster than the integrated version, while the IPv6 version was quite as fast as the integrated one.

Here we should show a little bit more about how the filters really work. Let’s use an example of a simple filter:
filter foo {
if net ~ [10.0.0.0/8+] then reject;
preference = 2 * preference - 41;
accept;
}
This filter gets translated to an infix internal structure. 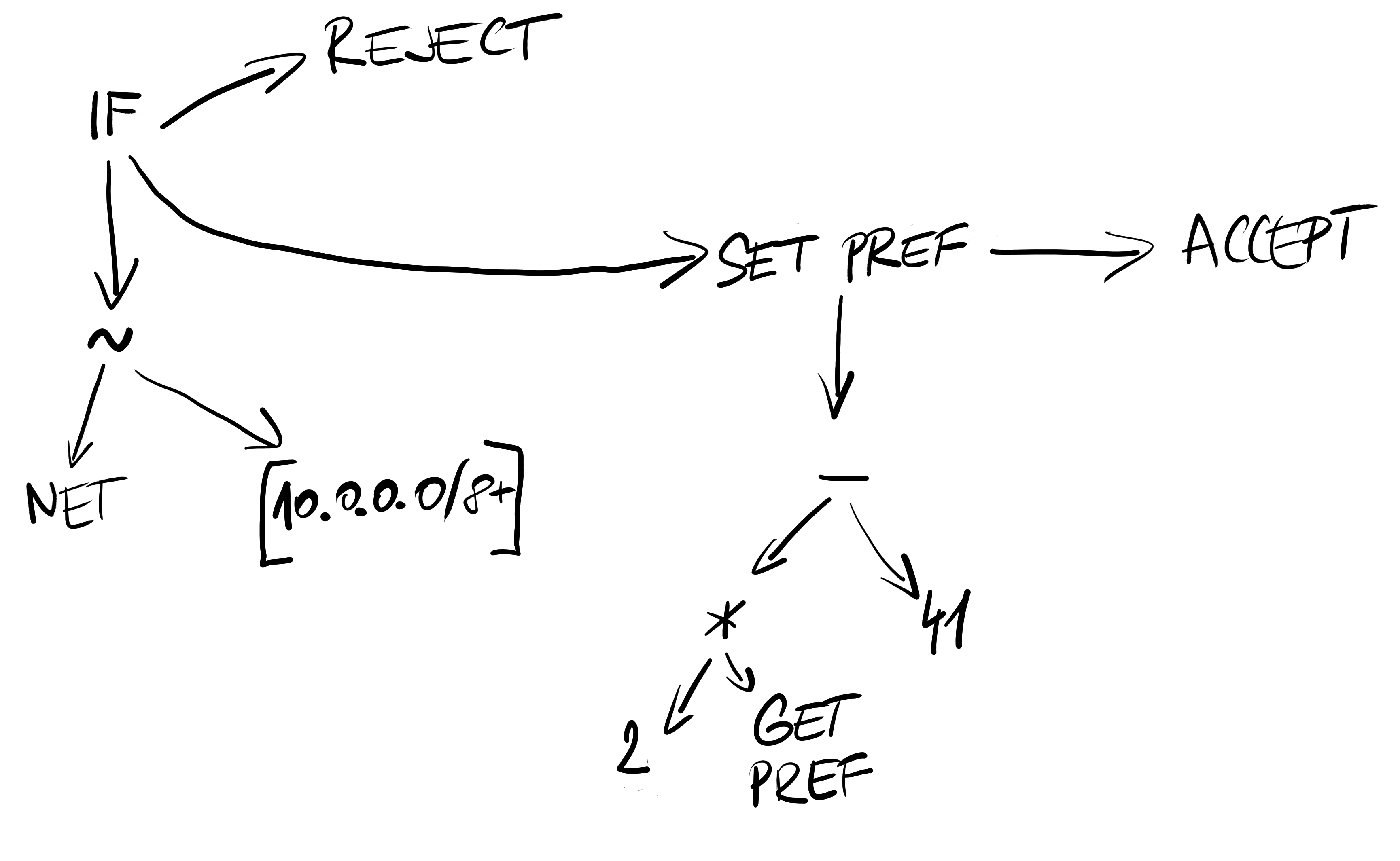 When executing, the filter interpreter just walks the filter internal structure recursively in the right order, executes the instructions, collects their results and finishes by either rejection or acceptation of the route.

After some thoughts how to minimize stack manipulation when everything you need is to take two numbers and multiply them, we decided to preprocess the filter internal structure to another structure which is much easier to execute. The interpreter is now using a data stack and behaves generally as a postfix-ordered language. We also thought about Lua which showed up to be quite a lot of work implementing all the glue achieving about the same performance.

After these changes, we managed to reduce the filter execution time by 10–40%, depending on how complex the filter is. Anyway, even this reduction is quite too little when there is one CPU core running for several minutes while others are sleeping.

As a side effect of the rework, the new filter interpreter is also completely thread-safe. It seemed to be the way to go – running the filters in parallel while keeping everything else single-threaded. The main problem of this solution is a too fine granularity of parallel jobs. We would spend lots of time on synchronization overhead.

The only filter parallel execution was also too one-sided, useful only for configurations with complex filters. In other cases, the major problem is best route recalculation, OSPF recalculation or also kernel synchronization. It also turned out to be dirty a lot from the code cleanliness’ point of view.

Therefore we chose to make BIRD multithreaded completely. We designed a way how to gradually enable parallel computation and best usage of all available CPU cores. Our goals are three:

It’s still a long road to the version 2.1. This series of texts should document what is needed to be changed, why we do it and how. In the next chapter, we’re going to describe the structures for routes and their attributes. Stay tuned!