If we try to compare the past two years, we can say that in terms of the number of processed incoming reports, the STOPonline.cz line was much more successful, if we can call it that.

The pandemic certainly had an impact, causing people to be more active in the Internet environment. A new column has been added to the monitored categories, namely incitement to suicide through websites where you can find more or less accurate instructions or advice on how to achieve death in this way. This area still sees a growing trend, and we wonder whether such conduct can be classified as a crime of participation in suicide. In any case, we do our best to remove such websites from the online environment as quickly as possible. 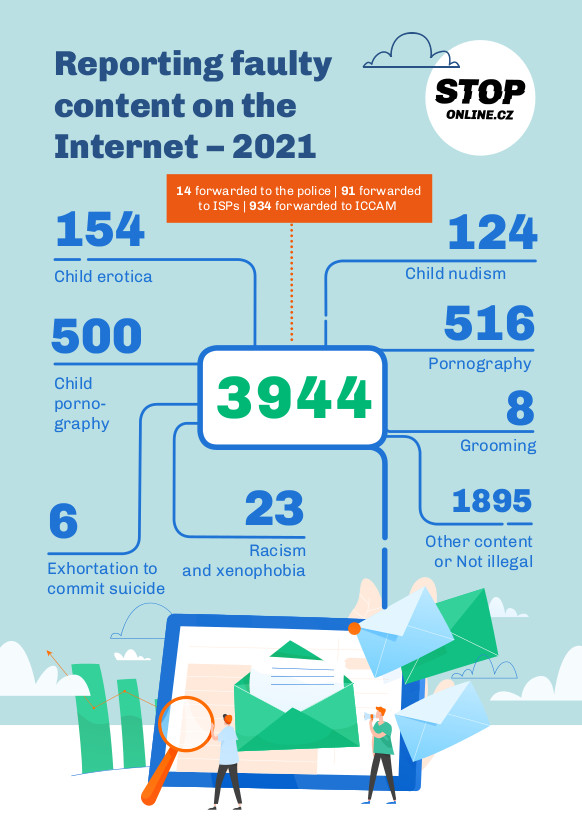 Another frequent phenomenon that we noticed last year is offensive comments, not only on social networks, but also in discussions under news articles (most often on Novinky.cz and Seznam zpravy). In these cases, reported comments are usually removed very quickly.

The number of reported cases of child pornography rose again last year. Fortunately, in a large part of the cases, the content was not located in the Czech Republic. Such reports are uploaded to the international ICCAM system, which is maintained in cooperation with INTERPOL. Child pornography could be divided into two subcategories:

The number of cases in which it is clear that the minor is filming themselves is constantly increasing. Here we observe that the age of such minors is constantly decreasing. Earlier, we noticed such content mainly in older teenagers, while today a ten- or nine-year-old child is no exception. This, too, may be caused by the pandemic, which caused most children to take refuge in the online world. And this should not come as a surprise to us, as we are in a similar situation. The more time a child spends browsing the Internet, the more likely they are to come across websites with sexual content.

The number of reports of fake e-shops has also increased this year. Although such reports are not within the competence of the STOPonline.cz line, the CZ.NIC Association may address them in relation to the rules of registration of domain names.

We must not forget the scam e-mails called phishing. Last year, Internet users from the Czech Republic were also targeted by such attacks on a daily basis. For example, many people found in their e-mail inbox a request from the “Czech Post” to pay a fee for the transport of a package. The attackers attempted to steal access data and passwords for Internet banking or payment cards. Incidents of this type were handed over to CSIRT.CZ.

Social networks continue to pose the greatest risk for children. It usually begins with a child starting to text someone they don’t even know, often out of boredom. If you saw the movie “Caught in the Net”, you probably know where such communication can lead. What we have not encountered as much before, however, are reports from parents who themselves came across such communication carried out by their children and tried to address the problem. I attribute this new phenomenon to the current times where we see parents trying to exercise more control over their children’s online activity.

In the new year, we are ready to continue facing the challenges it brings and to work on making the Internet a safer place for everyone, especially for children.