Within the project Safely on the Net, the first audiobook of the CZ.NIC Edition was created. The model for the audiobook became a popular children’s book ON-LINE ZOO.

With this second edition of the book, we go to elementary schools and municipal libraries in the Czech Republic for almost a year and talk to children about Internet and cyber security. Nearly 800 children aged 5 to 9 years listened to the extracts from the book read by us. Younger pupils learn from us the benefits of the online world, but also what to watch out for. We try not to scare them unnecessarily, but rather to help them orientate in the pitfalls of the virtual environment. The discussion is interactive. We give children space to express themselves, ask them how they would behave in certain cases, and offer guidance on how to avoid some situations.

The voice of our first audiobook was bestowed by a theater and film actress Bára Milotová, whom we first met as part of this year’s Family Offline Week campaign and started our cooperation. In 2018, Bára launched the Audio for Children project and this year founded the non-profit organization Experience it (Prožij si to), where she focuses on experiential education for children through theatre adaptation of children’s bullying, cyberbullying, eating disorders related to social networking, media literacy and online addictions. 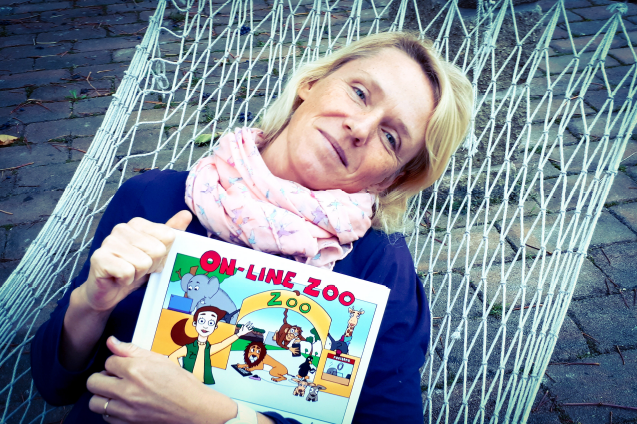 Her effort to return children to the world of listening to fairy tales and refining their own imagination without using mobile phones and tablets is very appealing to us and coincides with our aim to reach not only teachers but especially parents. We want to offer them an interesting alternative to the above-mentioned digital technologies, where children often thoughtlessly watch fairy tales and play games. For some parents, they are the most reliable “nanny”.

Music for the audio book ON-LINE ZOO was composed by Zdeněk Král, whose small listeners may know from the show Hýbánky broadcasted on Déčko in the Czech Television. Zdeněk received a number of awards and in 2018 even the OSA Award as the most successful composer of classical music.

The audiobook can be downloaded free of charge in the MP3 format on our website for a total of 22 minutes.

We wish you a pleasant listening.