We have released a new version of Turris OS 5.0. It is based on top of OpenWrt 19.07.3 with our patches and feed for all of Turris routers. In this article, we will go through new features and changes, including experimental migration from the Turris OS 3.x version. We will mention a few obstacles we faced during the development and introduce several features you can expect in future releases.

The previous version 4.0 was based on a the-still-supported version of OpenWrt 18.06, but it should be End of Life soon. We are now a step closer to the next releases of OpenWrt. During our development of Turris 5.0, we faced certain issues we had to solve. There were collisions between packages that provided files with a same name on a same path, but with different content. There were also nonexistent packages that were removed in upstream because no one maintains them anymore, or some software that was no longer maintained.

We were using almost the same kernel configuration as OpenWrt did, but in some cases, one of the Wi-Fi cards we are providing by default was not available. We enabled an additional kernel option and it has been working since then. We would like to thank the users who reported this issue to us during the testing stage. Before our planned release of Turris OS 5.0, there was an update of hostapd in OpenWrt 19.07 which did not seem problematic at all when looking at the source code changes, but after updating this package on the router, all the Wi-Fi networks stopped working and started again only after rebooting the router. After an investigation, we found out there was an issue in netifd, a network interface daemon for OpenWrt networks. Process checks were incorrectly implemented. We have been able to fix most of the issues, but we have found a few more during an intensive testing and we currently working on fixing them as soon as possible.

Let’s take a look at most interesting features OpenWrt 19.07 brings us. With that we will also present changes prepared for you by Turris team.

The biggest change is a redesigned Foris (reForis) with which we would like to replace the current old web interface. Foris has been with us for a long time and it deserves a new design using modern technologies like Bootstrap, React, and Flask. In the latest development version, there are new features, such as snapshots integration, as well as setting up a custom DNS forwarder. 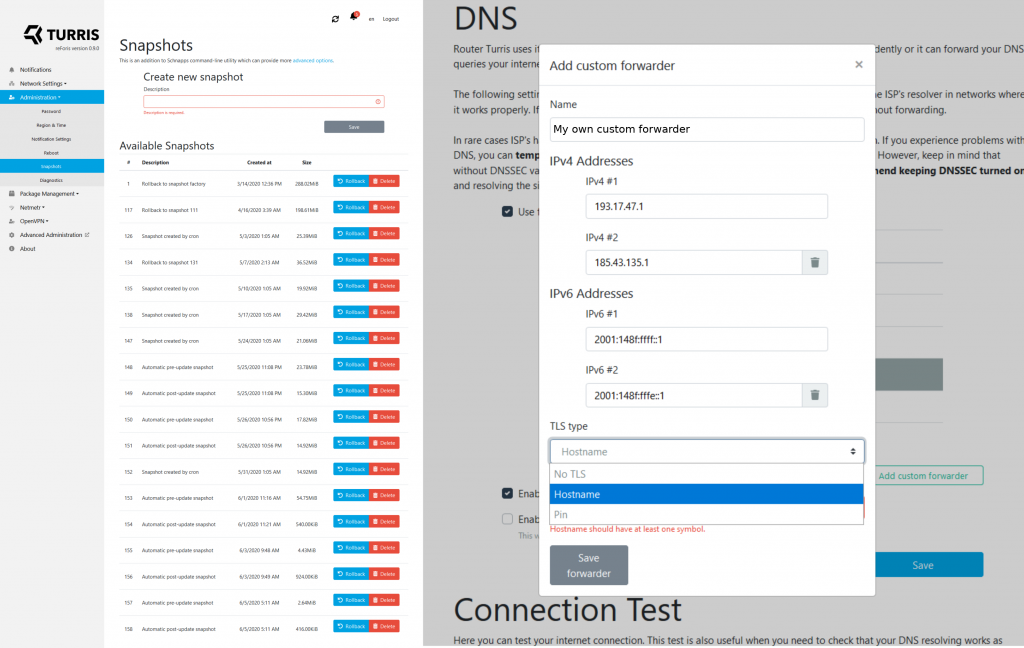 If you would like to give it a try and send us feedback, we will appreciate it. For now, you will need to install it in Foris (in tab Updater). Both interfaces are going to be present side by side for some time till reForis is fully tested and replaces Foris in the fullest.

Other news could be, for example, using cronie as a cron scheduler instead of vixie-cron, which is no longer in development. There is a new version of Updater, which was refactored and it uses less RAM during updating. We added drivers for more DVB tuners, such as Astrometa DVB-T2 2018 which is widely used.

Samba is a service for files (documents, photos, etc.) sharing within a local network, but also within the Internet. In OpenWrt 18.06, you might find Samba 3, which is vulnerable to security issues, but in OpenWrt 19.07, there is Samba 4. This version is actively maintained, and that’s why we prepared basic migration of settings from the older version to the current one.

OpenWrt brings initial support for the WPA3 standard. It is not provided by default and it requires installing additional packages. For now, we don’t consider providing these packages in the default configurations as there could be some incompatibility and issues with connecting to the Wi-Fi network which would use the WPA2+WPA3 mixed mode (many devices these days only support WPA2).

OpenWrt developers are working on improving performance and implemented client-side rendering. LuCI is now using JavaScript instead of Lua code whose processes were done on the router instead of the client.

That is all for now. We would like to thank everyone who tested this release in the testing branch. We appreciate your help and support and we hope that all these changes will be interesting and useful for you. Don’t hesitate to share your comments on our forum or here.