In 2018, in my article Phasing out IPv6 transition technologies, I brought information about the current development and use of Teredo and 6to4 technologies. In conclusion, I informed that Teredo prefix 2001::/32 is no longer promoted to foreign upstreams, but only within NIX.CZ and NIX.SK peering nodes, where global peers are active as well, so we did not limit the 6to4 technology due to certain traffic from abroad. In this blogpost, I will explain why we now want to turn off these two technologies.

RFC 7526 clearly speaks for the abolition of the 6to4 technology we are running, referring to network addressing using anycast as deprecated since 2015. At the same time, this technology shows a significant error rate, as highlighted by a 2010 article on labs.ripe.net. For these reasons, we have no longer analyzed this traffic, and instead focused more on Teredo server/relay; then we will proceed directly to shutdown. However, the data flow through 6to4 is basically comparable to that through Teredo.

To refresh your memory of how Teredo works, I suggest you read this article and take a look at this chart. At CZ.NIC, we operate both the Teredo server at teredo.nic.cz and a Teredo relay.

To get a good idea of how both components work, we studied network traffic by taking ten-minute samples during one working day. Based on the obtained IP addresses and the GeoIP database, we identified the countries of inbound and outbound traffic and prepared charts of the TOP 10 countries of the world with the highest percentage in the entire data traffic according to the selected criteria. 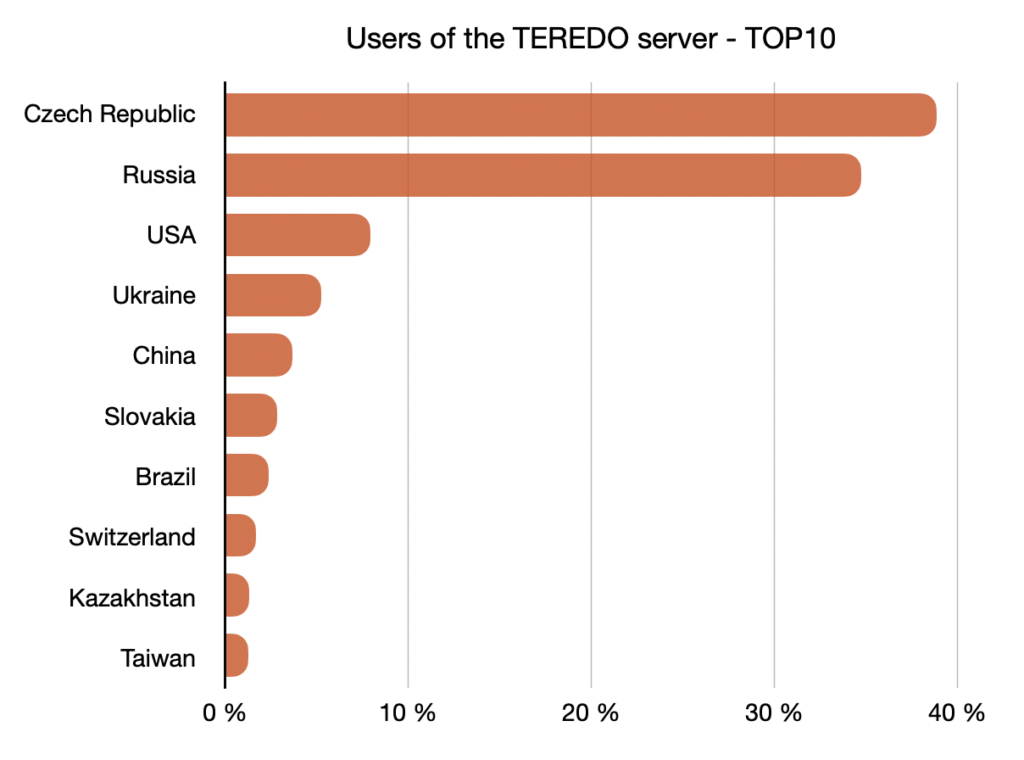 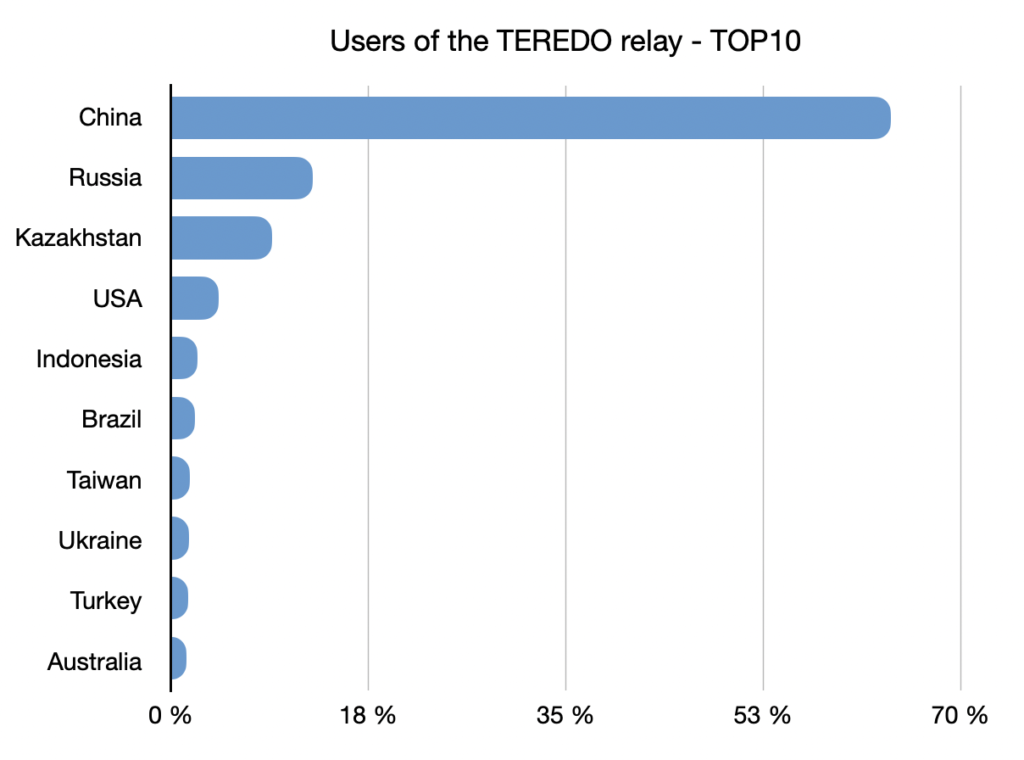 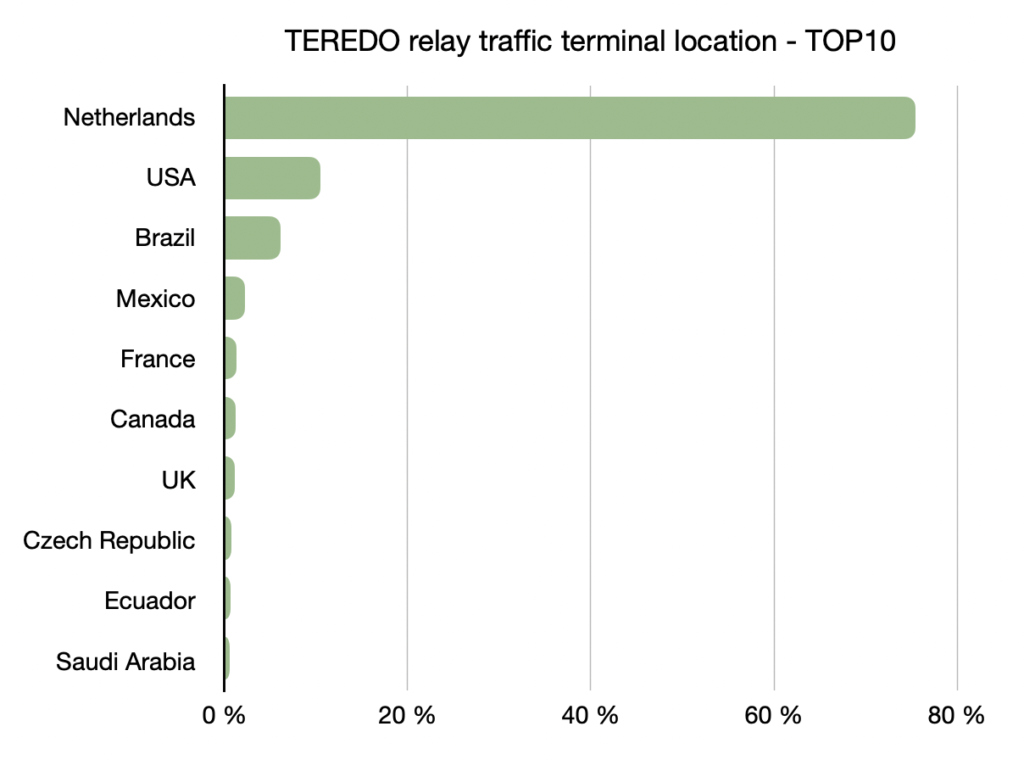 What do the charts show? The first (orange) one shows who uses the Teredo server the most. These are client stations that use for their configuration the address teredo.nic.cz directly. The second (blue) chart shows those who use our Teredo relay to communicate with the IPv6 world. Finally, the third (green) chart shows the destinations where traffic actually terminates.

If we put individual charts in context, we may arrive at the following:

Does it make sense to continue operating Teredo tunnels in order to improve comfort and response for users in the Czech Republic? We believe that it does not, because: 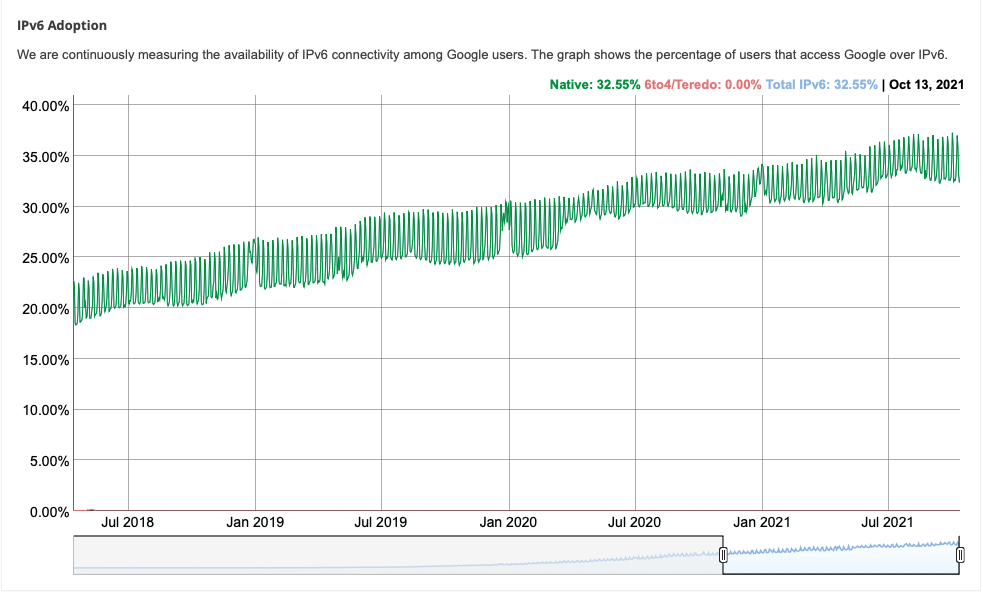 We also want to switch off for a completely pragmatic reason. The hardware on which the service runs is nearing the end of its life cycle, and investing in new hardware (as well as working on migration and subsequent administration) just doesn’t seem reasonable to us.

Based on the above, we have decided to try and turn off both IPv6 transition technologies on October 25, 2021 for a period of 24 hours.

If no major problem appears, we will definitely abolish both services on Monday, November 1, 2021. However, users in the Czech Republic will not lose a Teredo and 6to4 service node close by, as they are still run (as one of the last of the Mohicans) by Hurricane Electric, which is also peering at NIX.CZ. Of course, we will inform this company in advance before the final shutdown.