To those who want to test their Internet connection speed, there are several options available in the app store. An application for measuring high-speed Internet connection called Open Nettest was developed as part of the international project Open Crowdsourcing Data related to the Quality of Service of High-Speed Internet (MoQoS). Using this application, you can test the speed of connection provided by your mobile operator or the speed of connection through a wireless network.

How good is the connection in the Czech Republic?
You can find out by looking at the map available directly in the application. This map also records measurements made using the Czech NetMetr developed by CZ.NIC. Thanks to the color spots, it is clear at first glance in which areas the signal is stronger or weaker. While the capital city is virtually green, which means good coverage, some areas of our country still have places with a very weak, even zero signal.

What about other countries around the world?
The Open Nettest app has also measured Internet connection speeds in exotic countries such as French Polynesia, East Timor, Fiji, and Swaziland. Most measurements, however, were carried out in Slovenia, followed by Germany and Slovakia. Austria, where the Open Nettest originates from, surprisingly took the fourth place.

When is it measured the most?
Interestingly, tests with the Open Nettest app are most often performed on Tuesday afternoons (between 1:00 PM and 3:00 PM) and late evenings (between 9:00 PM and 11:00 PM). The application is also used intensively during Friday, Saturday and Sunday evenings.

How many tests have been performed?
Since the beginning of the project (January 1, 2017), around 400,000 tests have been performed using Open Nettest. 71% of them were on mobile Android devices, 17% on iPhones, 11% of the measurements were carried out using hardware probes (Turris routers) and 1% through web browsers. Just like NetMetr, Open Nettest allows speed tests to be performed directly on the web, for example from a home desktop computer. 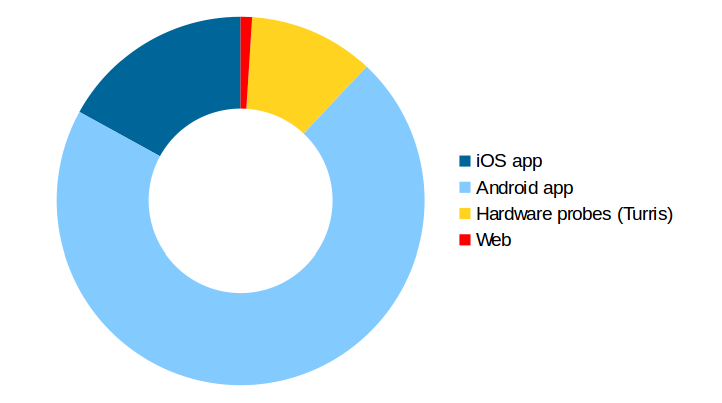 The MoQoS project is constantly developing both Open Nettest and NetMetr. In both applications, it is possible to run so-called continuous (cyclical) measurements, which are performed at regular intervals and with less demand for mobile data usage. Additionally, the application can detect and then display on the map so-called white spots — locations where no signal was detected.

To maximize the relevance of the measurement results and make them beneficial for all of us, it is important to take as many measurements as possible. This will give us a clearer image of mobile data connection speed in the Czech Republic and the world and to contribute to the improvement of signal coverage and quality by mobile operators. In order to increase the number of users and performed tests, in addition to marketing campaigns, the application Open NetTest introduces the so-called gamification (remuneration), allowing users to collect badges with cheerful children’s illustrations.